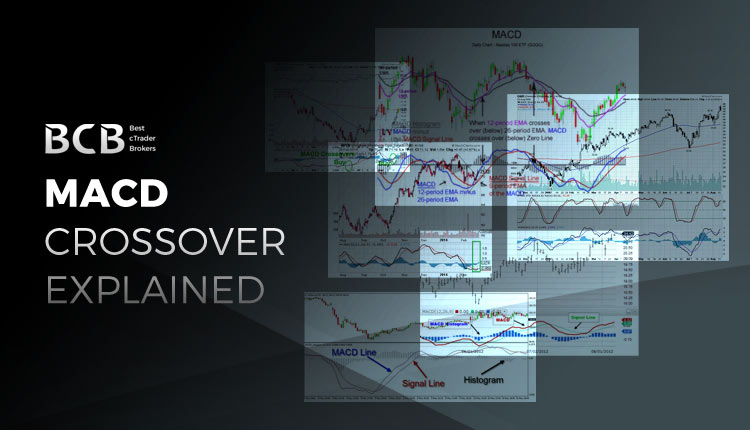 The MACD indicator is made up of three components. The indicator plots 2 lines and 1 histogram. Use the next image for references.

Like all technical analysis indicators, they can be read in different ways and should always be paired with others to verify any signal. The MACD presents signals in various forms. These are with a crossover, divergence and indication of trend strength.

A more advanced signal is divergence. Divergence occurs when the market is trending and is making new highs or lows, but the MACD histogram fails to make new lows or highs. This is a strong indication that a trend is exhausting. When there are two failed highs or lows on the candlestick price chart that do not correspond with the MACD indicator.

An Indication of Trend Strength

The MACD can be used to indicate the strength of a trend. The bigger the difference of the Moving Averages the stronger the trend. This means an upwards slope of the MACD Line shows that the moving averages are drawing further apart and thus the trend is strengthening. It’s also important how much higher or lower the MACD Line is above the baseline. The further the line is from zero level the stronger the trend. A very big distance from zero level could indicate an oversold or overbought market.

The Origin Story of MACD

The MACD Crossover was created by Gerald Appel in the late 1970s and it became known to traders in 1979. Appel is a professional money manager and investment advisor. Not only does he get heaps of respect from being the creator of one of the core indicators in almost every trader’s toolbox, but he has also written or co-authored over fifteen books to date. Even with this much credibility under his belt, he has one more secret weapon when it comes to reassuring investors, he is a qualified psychotherapist. This allows him to also address the personal and emotional concerns of his clients and not only their financial needs.

Making the Most of the Active Symbol Panel