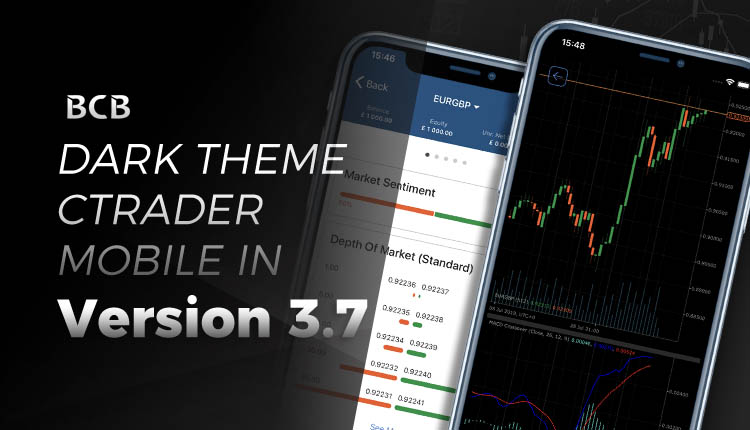 There have been a number of cTrader mobile updates since the major release of version 3.0. Since the major overhaul of the mobile which was released almost a year ago, there has been a spree of nice to have additions. In this release, however, there are two new major features that will make a lot of traders happy, in particular, the dark theme cTrader settings on the mobile app.

One of the features we anticipated at the start of the year has been introduced, sort of. This is not a dark theme or night them for the entire cTrader app. This is actually just a dark theme for the chart when you have it in full-screen mode. It’s a start, at least. You can find the setting to change your chart theme when you are on the chart screen. It’s not in general settings or account settings.

The Standard Depth of Market (DOM) can now be found in the Symbol Overview section on the mobile app. Depth of Market is important to gauge the available liquidity for securities and currencies at different price levels. It can say a lot about how active the market is, how deep the liquidity is and if slippage is likely and if so, how bad it could be. Again, this is a very important feature when trading. In fact, this is one of cTrader’s flagship features from the early days.

Since these features are so important, you might be wondering why they weren’t there from the beginning. It would seem that the company was in a rush to get the new app out on the market and chose to skip some features initially. Why it took so long to get these features introduced, it’s hard to say.